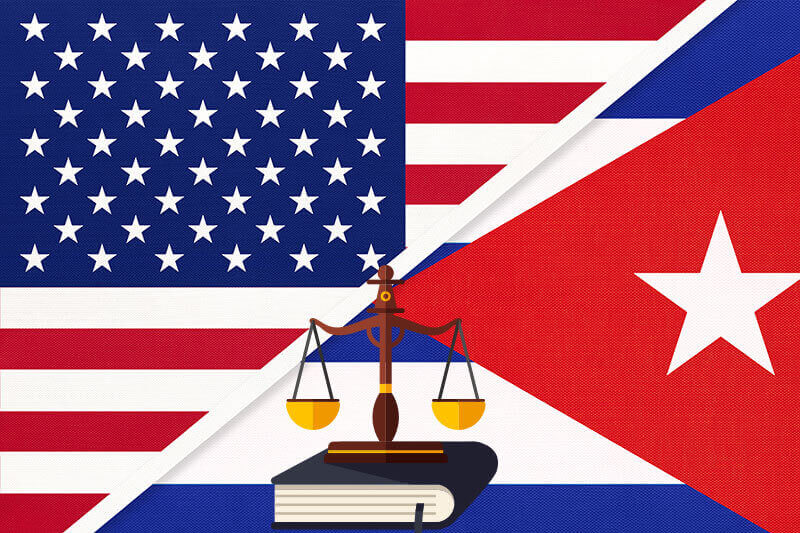 For more than four decades, the Cuban Adjustment Act has allowed Cuban citizens arriving in the country to enjoy certain immigration privileges. Thanks to this law, Cubans who immigrate illegally to the US may be eligible to obtain a Green Card or permanent residence.

Our immigration lawyers in Los Angeles are experts in the Cuban Adjustment Act and processing all types of American visas. We offer legal representation before the Los Angeles Immigration Court and help immigrants in any situation to fulfill their American dream.

The Cuban Adjustment Act offers special treatment to the citizens of that country with respect to other nations. However, to be admitted to the US, national foreigners born in Cuba must meet certain requirements and conditions that we explain in this article.

What Is The Cuban Adjustment Act?

Public Law 89-732 or the Cuban Adjustment Act is a federal law. It was enacted by the US government on November 2, 1966 in order to help Cuban citizens fleeing that country.

Cuban citizens can legally immigrate to the US through various programs:

Immigrant visas for Cuban family members of US citizens are issued by the US Citizenship and Immigration Services (USCIS).

This category of US visa is issued to parents, spouses and unmarried children under 21 years of age of US citizens. Also, there are immigrant visas available for individuals who immigrate for family or employment petitions.

Requirements To Obtain The Benefits Of The Adjustment Law

The Cuban citizen applying for permanent residence under CAA must meet the following requirements:

To apply for the residence card based on the Cuban Adjustment Act, the interested party must submit the following documents:

Note: Some of these forms must be submitted accompanied by their respective processing fee.

After completing the form and signing it, it must be sent to the USCIS address, according to the category of eligibility. The filing fee will depend on the age of the applicant.

Benefits Of The Cuban Adjustment Act

The most important advantage that Cuban immigrants have over people of other nationalities is that they immediately receive immigration benefits.

By setting foot on US soil regardless of means, especially illegal ones, they immediately gain legal status in the US.

The US government automatically grants refugee status (prima facie) to Cubans fleeing the island. In addition, they obtain facilities to work and access to social programs.

Among the main benefits obtained through the Cuban Adjustment Act in the United States we find the following:

Latest News On The Cuban Adjustment Act In 2022

Despite the validity of the Cuban Adjustment Act, many aliens are facing certain restrictions to establish themselves legally in the US. This is due to the boom in immigrants from the Caribbean island this year.

Waves of Cubans fleeing their country are arriving due to:

By the way, the organization My Voice Counts Inc, DBA Comunidad Venezuela, is pushing for a law similar to the Cuban adjustment to US congressmen. The Venezuelan Adjustment Act that could be discussed at any time.

What Happens After Crossing The Border?

Those who cross the border receive a release order under recognition or parole. This order establishes stay limits ranging from 10 days to three months.

So the new arrivals should immediately try to regularize their situation through American relatives. However, the Cuban government itself has been, in some way, promoting immigration to relieve internal pressure.

The ultimate goal for you and thousands of immigrants like you is to know how to legally enter the United States. In our dedicated blog you will find all the immigration options to the USA.

The spouse of a Cuban citizen who entitles to CAA, can also receive permanent residence, as well as children under 21 years of age. To process this benefit, it does not matter when the spouse adjusted their status to that of permanent resident.

In this process, the spouse must meet the same requirements as the main applicant. Only some of them vary. However, you must first make sure that your spouse meets all the application requirements.

In addition to filling out Form I-485, the following documents must be attached:

What Documents Could I Submit To Prove Physical Presence?

There are some notable differences between both migratory reliefs. Let’s see:

Can I Work While Applying For Residency Under The Cuban Adjustment Act?

Yes. The application for employment authorization is made through Form I-765. After being completed and signed, it must be sent to USCIS.

In What Situation Could USCIS Object To My Adjustment Of Status?

When the applicant has or had a J-1 or J-2 exchange visitor immigrant visa. Until you meet the 2-year foreign residency requirement, you cannot apply for adjustment of status.

Unless you obtain an exemption or receive authorization from the Department of State to obtain one. This exemption is requested through Form I-612.

Find out what are considered deportable offenses in our blog and what happens if you overstay your US visa.

What Are The Grounds For Inadmissibility To Apply For The CAA-Based Green Card?

The reasons why a person can be declared inadmissible, including Cuban citizens are:

In the evaluation of residence card applications in accordance with the Cuban Adjustment Act, the grounds for inadmissibility are not taken into account due to:

What Happens If I Am Declared Inadmissible?

The law allows you to apply for a waiver through Form I-601 and Form I-212. With the help of a competent immigration attorney, you may be able to show that you are eligible for a waiver.

Can I Be Eligible For CAA If I Entered The US With Another Nationality?

You may be eligible for the Cuban Adjustment Act as soon as you prove that you are a Cuban citizen or also have that nationality.

Can I Leave the US After Applying for Cuban Adjustment of Status?

It is advisable not to do so, unless it is a matter of force majeure. Although the law does not state whether the year of presence must be fulfilled continuously or not.

In any case, the duration and purpose of the travel will be taken into account. It is important not to imply to immigration that you plan to abandon your residence. Therefore, if the applicant is readmitted upon return, the account will continue to run.

Do Domestic Violence Spouses And Battered Children Qualify For A CAA Waiver?

Both spouses who are victims of domestic violence and abused children are covered by the Violence Against Women Act (VAWA).

If you need to process the Green Card based on the Cuban Adjustment Law, you are in the right place. We are an immigration law firm of Cuban origin with more than 40 years of experience in the field. Call now and get a professional consultation without obligation.

Can you become a US citizen without speaking English