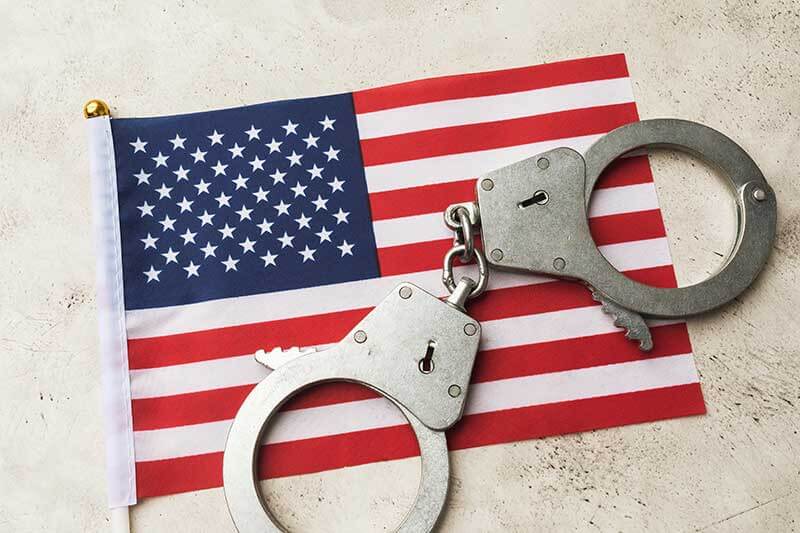 There are a variety of crimes that could be considered deportable offenses and therefore, can result in deportation. In this article we explain what they are and how you can be defended.

If you fear deportation or are accused of any of the major crimes in the United States, talk to us. Our Los Angeles criminal defense attorneys can help you resolve your case.

What are considered deportable offenses in 2022

Felonies can lead not only to prison sentences but also to deportation. It does not matter how long the alien has lived in the United States, or if they have a dependent US citizen child.

Some misdemeanors, which are punishable by imprisonment for up to one year and fines, also have immigration consequences. For example, traffic tickets, car accidents in Los Angeles, driving under the influence or drugs (DUI /DWI) or driving on a suspended license in California.

For an alien it is important to know which crimes are considered deportable offenses by immigration and how to solve them. Remember that our criminal defense lawyers have been litigating these cases in California courts for over 40 years.

Crimes and deportable offenses that could lead to deportation

A charge of any of the following felonies can lead to deportation from the U.S. Such felonies bar re-entry into the country under the Immigration and Nationality Act (INA). The following are crimes that will make an immigrant deportable:

What are the differences between an offense and a crime?

As already stated, criminal offenses are divided into felonies and misdemeanors.

What are aggravated felonies in the United States?

For migratory purposes, they are those that:

What is a felony in the United States?

Under US law, a felony is one that:

What is an aggravated crime?

The list of aggravated felonies that lead to deportation of an alien from the US is very extensive. This list tends to change regularly due to the inclusion or exclusion of felonies and crimes of moral turpitude.

Some of the specific aggravated felonies in the United States that immigration considers deportable offenses are the following:

Depending on the severity of the crime, a criminal defense attorney may be able to help you reduce your sentence or qualify for a waiver. You may be interested in reviewing our article about unlawful presence in the United States.

Who prepares and classifies the list of deportable offenses?

The United States Congress is in charge of deciding which crimes to include or exclude from the list. It does so in accordance with the immigration policy followed by the federal government. Initially, only felonies or serious crimes are introduced.

Subsequently, minor crimes or misdemeanors were included. Aggravated felonies established by Congress may have retroactive effect. That is, those that appear in the criminal record of the immigrant before being included in the list.

Except that Congress itself establishes that they will only be applied from the moment of their approval or inclusion.

If you want to learn more about clearing criminal records in California, you can read our special article dedicated to the subject.

If I was convicted of an aggravated crime, can I request voluntary departure?

No. No alien with lawful status or unlawful presence in the US convicted of an aggravated felony would be eligible for voluntary departure from the US.

What categories of immigrants can be deported?

A felony and certain misdemeanors can affect the immigration status of:

In addition to learning about deportable offenses, we have covered many of these topics in different articles on the web. Review how to get a Green Card, Asylum in the United States, Refugee in America, or the J-1 visa for more information.

What are the consequences of deportation and inadmissibility?

There are crimes that also place the immigrant in the category of inadmissible, if they are convicted of an aggravated crime. That means they will not be allowed back into the United States if they leave the country.

If the alien is not yet a citizen, they would also not be allowed to adjust status or obtain US citizenship through naturalization. The good news is that a conviction for an impermissible crime does not necessarily lead to removal from the US. With the help of an experienced immigration attorney, you may be able to achieve an immigration waiver or other relief.

Are there any exceptions for these cases?

Yes. There is only one very rare exception where after the 10-year punishment a special waiver is requested for re-entry into the US from Customs and Border Protection (CBP).

The waiver application or re-entry permit is submitted through form I-212.

What happens after the sentence for an aggravated felony is served?

The alien is detained or placed in immigration custody. What happens next will depend on the person’s immigration status. The procedure is different for permanent residents and for other legal or illegal immigrants.

Except that, due to the seriousness of the crime and the circumstances, the judge decides its immediate removal. In that case, the options for the immigrant are considerably reduced.

In such a circumstance, they cannot apply for asylum, cancellation of removal, or withholding of removal. In any case, a criminal lawyer specializing in immigration could find a solution.

Can I apply for cancellation of removal after a conviction?

Yes. Even if the person is not eligible for any other type of immigration relief. The procedure to apply for cancellation of removal is done through the US Immigration Court.

Only lawful permanent residents who meet the following requirements can apply for cancellation of removal:

What relief is available to immigrants with a criminal conviction?

Some individuals with no criminal record for deportable crimes or offenses may benefit from certain criminal relief. In this way, they would try to save their immigration status if they manage to:

What can I do if I am charged with a crime that will lead to deportation?

As it is a serious crime, it is best to contact a criminal lawyer. Both legal advice and defense is essential in these cases to try to:

What crimes does immigration waive?

The United States immigration services, on the other hand, could pardon certain minor crimes. To request it, the petition for the I-601 immigration pardon (waiver) is submitted. While to avoid deportation it is done through the I-212 waiver.

It is at the discretion of the immigration authority to decide whether or not to grant said pardons.

Can I be deported for accumulating DUI offenses?

Yes. In fact, there is case law related to these cases. In 2019, a court ruled in favor of the Office of Immigration Review (EOIR) requesting the deportation of migrants.

The ruling establishes that a person with two or more convictions for drunk driving or under the influence of drugs (DUI), can be deported. The EOIR argued that those who accumulate two or more DUIs do not have good moral character.

Can I be deported for being addicted to drugs?

Yes. The Immigration and Nationality Act (INA) also considers drug use an aggravated crime. The immigrant does not have to have been previously convicted of the crime of drug use.

Section 212(a)(2)(B) of the INA provides for the individual to be deported if:

For what other reasons can I be deported?

Likewise, USCIS includes adultery or polygamy in its updated guidance on good moral character. That is, an alien could lose their immigration status for this reason.

However, in California adultery is not a crime, except for the military. The guide also includes human smuggling and gaming crimes, among others.

Can a misdemeanor be excused as a crime of moral turpitude?

How can a lawyer prove that a crime is misdemeanor and get a plea of ​​inadmissibility?

You must provide the immigration officer who is handling your case and who will rule on the application:

The lawyer must take into account the procedures applied by the court of the case, because they also tend to vary. Generally, to request these types of records, you must go to the clerk of the court that convicted you.

The maximum sentence according to state or municipal status must be adjusted to the exception. This misdemeanor exception applies only to crimes of moral turpitude.

Now you know what are deportable offenses, If you have been accused of any of these, call us today. We will arrange a private consultation without obligation to analyze your case. For more than 40 years we have saved hundreds of immigrants from jail and deportation.