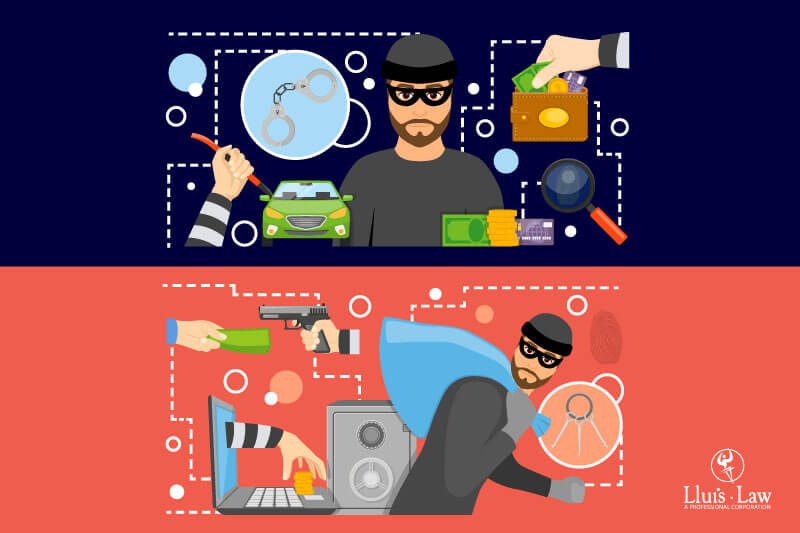 Although they are similar legal terms, the California Penal Code clearly states the difference between robbery and theft.

If you have been charged with any of these crimes, the theft lawyers at Lluis Law know how to resolve these matters.

Call now and you will get a professional, no obligation consultation. We will answer all your questions related to the topic, as well as possible sanctions and available options for your case.

According to the California Penal Code, these types of crimes can be divided into two broad categories of criminal crimes. Theft-related violations and non-theft property violations.

Violations or damage to property not related to theft include:

Instead theft-related property crimes include:

How are robbery and theft different?

Although they share certain characteristics, they are different categories of crimes. The basic difference between robbery and theft is motivation, the use of force and the way they are carried out:

Even if the perpetrator did not cause physical injury to the victim, but only threats, it is still considered robbery.

For more information on this crime, please review our “Robbery in California” section.

To learn all about this crime, check out our ” What is theft and petty theft” section.

Similarities between both crimes

The confusion in the use of one and the other term arises because in both there is a misappropriation.

Elements to establish the crime of robbery

To prove the crime of robbery in California, the prosecutor must clearly establish the following elements at trial:

Stolen property does not necessarily have to be with the person or body of the victim. It is enough that the personal property taken has been near the victim or within sight or hearing.

What Are The General Penalties For Theft And Robbery?

The penalties for each of these crimes are also different. The judge establishes them according to the type of property stolen and its value. For example, stealing a firearm is not the same as stealing a bicycle.

Penalties for petty theft under the California Penal Code include:

In the defense and representation of people accused of this type of crime, the case must be carefully studied. This is the only way to determine the best defense strategy to be used with the client.

Defenses in general for robbery or theft can be based on:

Inconsistencies in the accusation

It is sometimes possible to show that the prosecutor was wrong to classify as a robbery a crime that actually corresponded to theft.

An experienced theft and robbery attorney can argue that the prosecuting party failed to constitute the crime of robbery.

Some people are also wrongly accused of being confused with others. This frequently occurs in police line-ups, where the victim misidentifies the alleged offender.

Sometimes even the police can influence the victim’s judgment to identify an alleged assailant or thief. We know that people after having a traumatic experience like these are in shock.

This could affect your ability to identify the aggressor. Eyewitness-based allegations often also have inconsistencies.

Some cases presented in Los Angeles court are not even supported by sufficient evidence. There are no eyewitnesses, no confessions or compelling testimonies of the victims.

Those cases could be dismissed by the judge due to lack of evidence.

Police actions in theft or robbery cases are sometimes unlawful. Confiscation of items stolen from the defendant’s home or car is done without a search warrant.

A motion by our attorneys can overturn a poorly constructed judicial process. The judge in these cases is requested to suppress the evidence because it was obtained illegally.

You already know the difference between theft and robbery. Whatever your case is, our Los Angeles criminal lawyers always have a solution at hand. As specialists with over 50 years of combined legal practice, we always offer our clients strong and effective defenses.

We are known as the best for our results. If it is not possible through negotiation, we will go to trial and fight yout case.