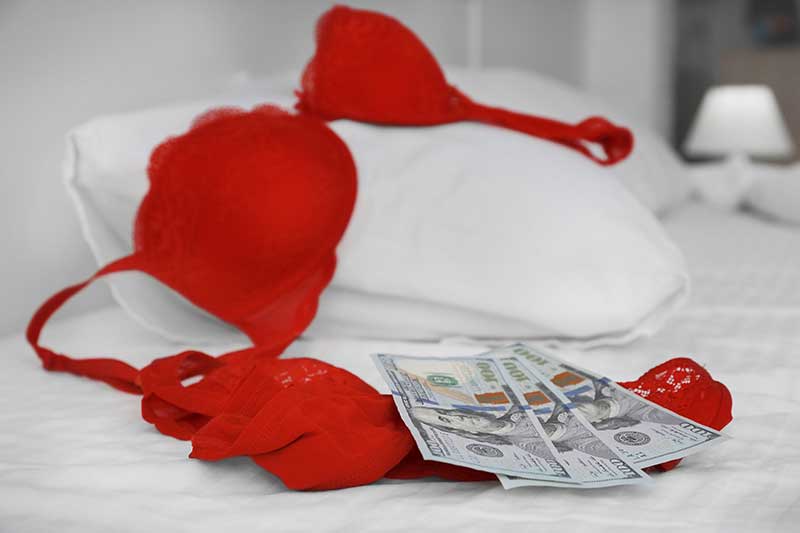 We often get asked in our offices: Is prostitution legal in California? Although it is often a consensual practice, prostitution is still a crime in California. It generally appears associated with human trafficking and drug crimes.

If you have been charged with prostitution, our Los Angeles criminal lawyers can help. We have over 40 years of experience litigating these matters with great success.

Contact us now and request a confidential consultation to review your case.

So, is prostitution legal somehow in California?

In Los Angeles and throughout the state of California, prostitution is illegal, under Penal Code 647b PC. Both the buying and selling of sex are prohibited. Despite the fact that a recent law protects the rights of sex workers.

The practice of prostitution carries punishments that include fines of $1,000 and up to 6 months in prison. On the other hand, hiring company ladies (escorts) does not, as we will explain later.

Prostitution is considered to be the act of having sexual relations with another person in exchange for money or another good. Also to any lewd act of a person with a client that seeks to cause sexual gratification or excitement.

What is a lewd act?

It is any activity of a sexual nature between a prostitute and her client. It involves physical contact or not with the genitals, buttocks and breasts of the woman.

Lewd acts also seek to provoke excitement in those who hire these services. They differ from other sex crimes because there is no penetration.

You may also be interested in reading our article on lewd acts with a child. There you will learn everything about this heavily punished crime in California.

Elements that define the crime of prostitution in Los Angeles, California

The three elements present in prostitution are:

Examples of the crime of prostitution in California

Prostitution in California is considered:

What do the new California laws say about prostitution?

Among the approved changes are:

A bill submitted to the Legislature seeks to repeal the crime of loitering to practice prostitution. The proposal still awaits its discussion and approval or denial.

What does Senate Bill 233 say?

This bill (SB 233) was passed on July 30, 2019, but went into effect on January 1, 2020. The two most important changes made to California prostitution law can be summarized as follows:

In general, SB 233 protects those who report being victims or witnesses of some crimes, including:

What are the benefits of reporting prostitution crimes?

Basically, it prohibits the person making the complaint from being arrested on a charge of:

Before prostitution laws were reformed in California, reporting this crime could incriminate the person accused of committing it. The impossibility of denouncing and punishing the mafias facilitated the growth of this activity.

If this bill is approved, the law that prohibits loitering for the purpose of practicing prostitution would be repealed.

Likewise, it would allow those who have paid sentences for this crime to ask a court to dismiss and clean their criminal records.

How is the crime of prostitution punished in California?

It is considered a minor sexual offense, whose first conviction carries a punishment of:

On the other hand, prostitution is classified as a previous crime. It means that higher sentences are imposed for additional crimes, including mandatory:

The law considers those who practice prostitution as guilty as those who seek sexual favors (client or “john”). But equally to the person who profits or benefits from this practice: the pimp.

A prostitution conviction does not result in registration as a sex offender. However, although it is considered a misdemeanor, the charge of prostitution can:

When the crime is committed in a residential area and inside a motor vehicle, it could lead to:

How is the crime of requesting sexual favors from a minor constituted?

A person can be penalized for having sexual relations with children or adolescents if:

On the other hand,

What are the penalties for having sex with a minor?

Soliciting sexual acts from a minor is a wobbler. It is punishable as a misdemeanor or felony. To do this, the judge will take into account the circumstances of the event, the age of the accused and their criminal record.

Can a minor be arrested for practicing child prostitution?

No minor can be arrested for engaging in prostitution in California. This practice was decriminalized since January 2017.

However, if the police catch a minor selling their body, they will place them in the custody of a county child welfare agency. They will immediately be placed under the guardianship of a juvenile court.

What is the crime of pimping?

The crime of “instigation and pimping” is described in Penal Code 266h and 266i. The pimp can be arrested under the charge set forth in Penal Code 653.23, which prohibits “directing, supervising, recruiting or assisting” a prostitute.

The pimp will be arrested and punished if:

The punishment for inducing a person to practice prostitution is up to 6 years in prison and/or payment of a maximum fine of $10,000.

Supervising or helping a prostitute

Penal Code 653.23 PC also makes it a crime to supervise or otherwise assist a prostitute. This law also punishes those who charge or receive profits for participating in the process of hiring a prostitute.

How is a request for sexual favors scored?

It has a criminal qualification similar to the exercise of prostitution. The only difference is that prostitution involves the sexual act itself and payment. While the request for sexual favors involves the search for this practice.

In California, the crime of soliciting sexual favors for money includes:

Possible legal defenses against the crime of prostitution in California

Differences between prostitution and escorting

If it is proven that the true purpose of hiring an escort was to have sexual relations with him/her, the person who hires them can be accused of prostitution. Even if it does not lead to sexual contact between the two.

To be an escort in California, a license is required. These services are usually booked online through an escort agency.

Prostitution is not legal and is fueled by human trafficking, another crime for which California ranks first in the US.

The sex trafficking of women and children is a very lucrative criminal industry. The mafias dedicated to human trafficking obtain millionaire income. It is estimated that a person can get between $150,000 and $200,000 for each person/child they exploit.

According to research conducted by the National Human Trafficking Hotline organization :

Data from UNICEF indicate that human trafficking generates around 32 billion dollars for mafias dedicated to the business of prostitution. This places prostitution as the second most lucrative crime in the world.

Now that you know that prostitution is not legal in California, if you have been charged with the crime of prostitution in California or are being investigated, just give us a call and we can help you. Our attorneys have more than 50 years of combined experience defending innocent people wrongly accused.

Can you carry a concealed weapon in California?