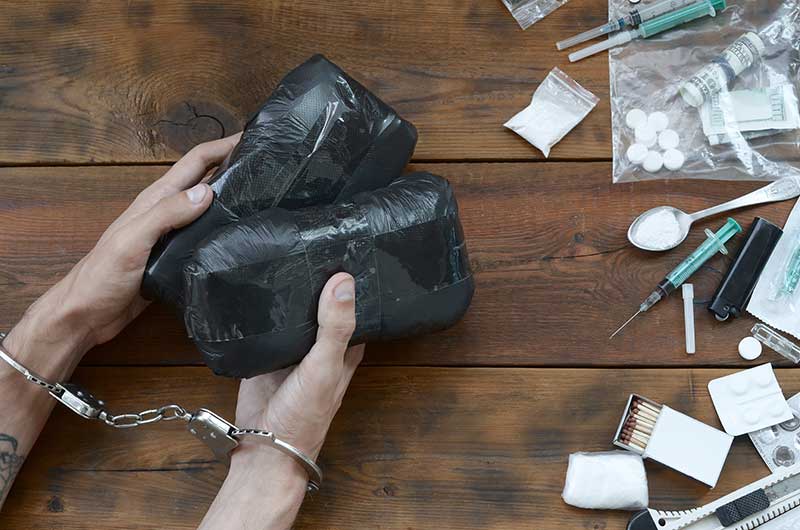 If you were arrested on this charge, the Los Angeles drug trafficking attorney at Lluis Law can help. Our firm has two attorneys with a combined experience of over 50 years representing hundreds of clients with favorable results.

Our Los Angeles drug crimes lawyers ensure that your rights are protected and offer capable and efficient legal representation.

Drug trafficking is one of the crimes most punished by US law. Likewise, in California, it is considered a felony and is severely punished by the courts.

So if you have been arrested on a drug charge you must act quickly. You will need the representation and legal assistance of a competent attorney who defends you with passion and safeguards your rights.

The crime of drug trafficking covers the manufacture, cultivation, smuggling and transportation of drugs, among others. Either within the US or through the state of California. Consequently, the defendant may face state or federal charges.

Even if you are not directly responsible, you will need a drug attorney to represent you. At Lluis Law we pride ourselves on being one of the best defense law firms for drug trafficking charges in Los Angeles.

Consequences Of A Drug Crime Conviction

Penalties for drug-related offenses and possession of controlled substances carry penalties that include:

You may also be interested in reading our article on resisting arrest in California.

These are some of the most frequent drug cases that we handle in our office:

The drugs that usually appear involved in these cases are:

Trafficking in controlled substances is illegal in the state of California under various codes, including:

The law makes it illegal to do any of the following activities with controlled substances (narcotics):

Drug trafficking charges are punishable by state and federal drug laws. Such charges carry prison sentences of three to nine years, if the offense is a first time. If the defendant is a repeat offender and falls within the three strikes law, the penalty increases.

The amount of drug found and the circumstances of the event also count. As well as the individual’s criminal record. If you need to clean your criminal record, our experts are highly experienced.

The larger the volume of the drug seized, the greater the punishment including prison sentences and fines.

For trafficking from 500 to 4,999 grams of cocaine, the penalty can be up to 40 years in prison, if there are aggravating circumstances. Plus $5 million in fines, under federal drug law.

Traffic With Intent To Sell

The type of drug and the quantity, as well as the criminal record, are key for the imposition of the punishment. Likewise, mitigating or aggravating factors are taken into account around the case.

If you are accused of a drug trafficking crime for the first time, the penalties can be:

For one charge of trafficking substances containing:

If it is your first crime, you can receive this sentence for trafficking a substance that contains:

Up To 5 Years In Prison

For trafficking less than:

These penalties are increased if the defendant has other prior convictions for other drug-related offenses or any felony. Also if anyone suffered serious bodily injury or died during the arrest.

Transporting, importing into the state, selling, supplying, administering, or giving away methamphetamine is also illegal. The most common methamphetamines in California are: meth, blow, speed, rock, chalk, tina, ice, glass, and crank.

These drugs classified as dangerous are among the most abused in California. Individuals who are convicted of some of these crimes associated with methamphetamine trafficking can receive severe penalties.

Punishments for trafficking methamphetamine in the state range from three, six and up to nine years in state prison.

The regulations of this drug allow only the possession of small doses for personal use. Marijuana trafficking includes the transportation, importation, sale, supply, or gift without a valid license.

Individuals charged with this crime may face misdemeanor charges, depending on the amount. Although if the defendant also has a criminal record, traffics large quantities or sells it to minors, the crime is a felony. Therefore, the punishment for this crime rises to two, three or four years in prison.

In our article marijuana laws in California you will find more information on the subject.

Other Charges related to Drug Trafficking

Some of the most frequent crimes that our drug trafficking attorney in Los Angeles handle that are related to the trafficking of controlled substances are:

This offense includes possessing any of the controlled substances set forth in the California drug law. Such substances can be illegal drugs such as:

Under The Influence Of Drugs

Possession With Intent To Sell

When, in addition to the possession of drugs, the intention to sell them is established, the offense becomes even more serious. During a drug trial, the seriousness of the charges depends on the circumstances of the crime.

That is, the amount of drugs / medication found during the arrest and the disposition of the substance. Also, the paraphernalia used, the way the drug is packaged and others.

Here once again, the charges vary depending on the amount of drug found and the way it was transported. Apart from the intention of transporting the drug for sale.

Paraphernalia are the tools used for the sale or consumption of drugs. For example, pipes, injectors, spoons, scales, tubes, bags and so on.

The charges for possession of paraphernalia for the use / sale of drugs are in addition to the other charges that are established.

Fraud can occur in two ways:

Driving Under The Influence (DUI)

DUI charges are not only related to driving drunk or with a high degree of alcohol in the blood 0.08 g / dl. But also for driving under the influence of drugs, including marijuana that is legal in California and certain prescription drugs.

Driving under the influence of prescription drugs that impair judgment or the ability to drive responsibly is also illegal. The DUI crime can be considered a felony, depending on the degree of intoxication and the circumstances of the act.

An example is if you cause a car accident or are involved in a hit-and-run case. In the link to the article of DUI lawyers in Los Angeles you will find more information on this topic.

Aggravating Factors Of The Crime Of Traffic

Both federal and state laws establish aggravating factors for the crime of drug trafficking. The background of the defendant (associated or not with drug trafficking), the type of drug and the amount found, increase the penalties.

Although drug trafficking charges are extremely serious, there are certain defenses that can be invoked. For example:

Dismissal Of Drug Charges And Reduction Of Sentence

The violation of constitutional rights or police errors can lead the judge to dismiss the charges. If not, it is possible to try a reduction in the penalty if it is the first time and depending on the case.

To resolve these cases, it is often necessary to negotiate with the prosecution. Bargaining involves the defendant pleading guilty and collaborating with the authorities by offering valuable information.

To negotiate a sentence, you must necessarily have an experienced and capable drug attorney by your side.

The criminal lawyers in Los Angeles at Lluis Law understand their clients perfectly but also:

For this reason, both Ramiro J. Lluis and David A. Lluis have well-earned prestige in the city. To learn more about the benefits of hiring a lawyer and how we can help you, call now.

If you have been charged with drug trafficking in Los Angeles, you can count on our specialist attorney. After reviewing your case we will be able to find the most suitable defense strategy for you. Call now and we’ll offer you a private, no-obligation consultation.