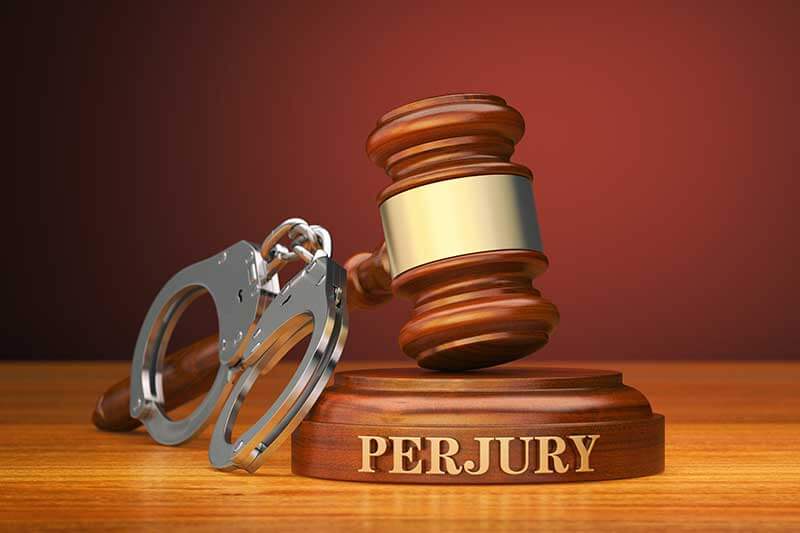 Have you been charged with the penalty of perjury in California? Then get in touch with one of our Los Angeles criminal defense lawyers so they can help you resolve your case.

We have over 50 years of combined experience litigating perjury cases. Call now and we can arrange a private professional consultation with you to review your case.

False testimony (Penalty of perjury) law in California in 2022

Perjury is a crime under California Penal Code 118 PC. As its name indicates, it consists of giving false testimony under oath before a qualified court or official.

California law punishes this crime with prison terms, probation and severe fines. To better understand what exactly perjury is, here are several examples.

Although it is true that the crime of perjury is very serious, there are few cases in which a trial for this crime reaches the end. Like libel or slander, they are crimes that are difficult to prove.

The law defines perjury as the act of:

“Any person who, in any affidavit taken before any person authorized to administer oaths, swears, affirms, declares, deposes, or certifies that he will testify, declare, depose, or certify before any competent tribunal, officer, or person, in any case then pending or thereafter to be instituted, in any particular manner, or to any particular fact, and in such affidavit willfully and contrary to such oath states as true any material matter which he knows to be false, is guilty of perjury.”

The following are some examples of this crime:

What elements constitute the crime and penalty of perjury in California?

To prove perjury the prosecutor must prove that the defendant:

It is important to specify that for the penalty of perjury in California to be constituted, the message must also be communicated.

For example, you fill out a job or other application form under oath with false information and then change your mind and do not submit it. In that case, you will not have committed perjury. Even if someone else filed it for you.

What is a material fact?

It is necessary that the statement lead to a material fact. That is, it is of importance or generates consequences.

The law qualifies a fact as material when:

However, in a trial it is not a prerequisite that the testimony necessarily influence the judicial process. Just as it is not established that the person had to know that his statement was material.

Under what circumstances could you be charged with perjury?

A person can be prosecuted for perjury if they give false information by:

What is the penalty for the crime of Perjury in California?

Perjury in the state is penalized as a felony with:

At the judge’s discretion, the court may order an alternative measure of parole. Thus, the convicted person would not have to remain in prison while serving the sentence.

How is perjury punished in the United States?

US federal law also punishes the crime of perjury. Penalties include:

Both penalties can be applied jointly or separately, depending on the seriousness of the crime and the circumstances.

Possible defenses to a perjury charge penalty in California

There are several defenses that a criminal defense attorney can typically invoke in a perjury case. Here are some of them:

What are the consequences of a perjury charge for an immigrant?

Remember that we are also specialized and certified  immigration lawyers.

Can a perjury conviction be expunged in California?

No. Unless the defendant is paroled. The expungement or cleaning of criminal records is prohibited for defendants who go to jail.

How does a conviction affect the right to bear arms?

The law states that anyone convicted of a felony cannot possess or use a deadly weapon. So yes, those convicted of perjury lose their rights to own and carry weapons.

What does the California statute of limitations say about perjury?

Filing criminal charges for perjury has a three-year statute of limitations. It means that after this period any action that is attempted can be rejected by the judge.

Time begins to tick from the moment the alleged case of perjury is discovered.

What other crimes are related to perjury?

The most common are:

How does perjury affect others?

In many ways, perjury is a harm to society and a crime against justice insofar as:

Why is it important to speak with a criminal lawyer?

Any criminal offense requires a qualified defense and this is only possible by hiring an expert criminal lawyer.

A criminal attorney can:

If you are facing a penalty of perjury in California and need the best Los Angeles criminal law firm to represent and defend you, we are here. We defend Hispanic and other nationality clients with a high degree of effectiveness and success. If after the initial consultation we decide to take your case, we will accompany you throughout the process.