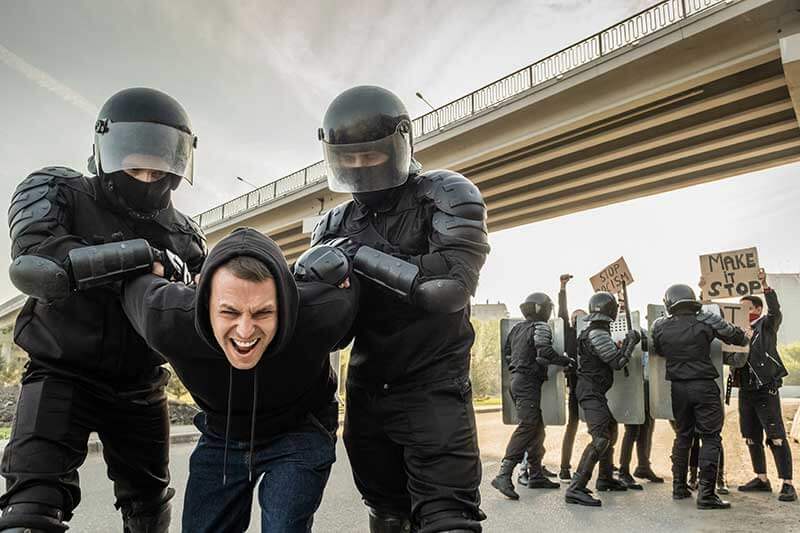 Have you been arrested for resisting arrest in California? If that is the case you can contact our criminal lawyers in Los Angeles to get out of jail.

We have spent more than 40 years defending individuals who have been arrested in Los Angeles for resisting the police. But if you are also an alien, you could be involved in serious immigration problems as well.

Resisting arrest should not be confused with just a physical struggle between a person and a police officer. This is considered a felony under Section 69 of the California Penal Code.

Assaulting a police officer or any other law enforcement officer is punishable by a fine of up to $10,000 and imprisonment for less than one year in the county jail.

The crime of resisting arrest is much broader and encompasses different situations. Section 148 PC of the act defines it as criminal conduct and is classified as a misdemeanor.

It involves willfully obstructing, resisting, or delaying the performance of an officer’s or police officer’s duties.

Resisting arrest as a misdemeanor

Resisting arrest as a misdemeanor does not necessarily require physical contact between the individual and the officer.

What happens if you resist arrest in California?

Any person who resists, prevents, delays or obstructs a law enforcement officer in the performance of his work commits a crime.

California law provides prison sentences and fines for those who are accused and convicted of this crime.

It is the same thing that happens if you run away from the police, after receiving the order to stop.

What is the punishment for resisting arrest?

Those charged with this crime under Section 148 of the Penal Code may face:

Arrests for alleged resisting arrest are common in California. Hence, a person accused of this charge must have the best criminal lawyers in Los Angeles to defend themselves.

Typically, the prosecution defends the arresting police officer and supports their version of events. A defendant, on the other hand, is at a disadvantage before the law if they do not have an appropriate defense.

What qualifies as resisting arrest in California?

To establish the crime of resisting arrest, the prosecution must prove three fundamental aspects in the case:

What are the possible criminal defenses?

Generally, criminal defense attorneys use three defense strategies to try to get the judge to:

To do so, they invoke one of the following defense arguments:

Is the evidence obtained through an illegal arrest valid?

Every person accused of this or any crime has the right to defend themselves. Therefore, it could prove that during the police procedure there was no such resistance to arrest.

What do the police say when they arrest someone?

During the process of detaining a person, the police are obliged to inform the suspects that:

This is what is known as a Miranda warning or right. In allusion to the case of Ernesto Arturo Miranda against the state of Arizona in which the defendant’s constitutional rights were violated.

The case was reopened and heard by the Arizona Supreme Court, which declared it null.

What crimes are related to resisting arrest?

Here are some of the crimes associated with resisting arrest:

Find out what are deportable offenses and how to act if ICE agents show up at your door in our criminal defense blog.

What is a police warrant?

An arrest warrant is an order written by a judge but executed by the police.

Cases in which an arrest warrant is issued

In all these cases a judge can issue an arrest warrant against the accused:

At the request of a prosecutor, the police could also proceed to arrest a suspect in a crime. Likewise, a police officer can make an arrest when they discover an individual committing a crime in flagrante delicto (in blazing).

What to do if I receive an arrest warrant?

Generally, when an arrest warrant is issued, the suspect is not previously informed. You will most likely know you are wanted at the time of your arrest.

What is an arrest?

An arrest is the deprivation of mobility or detention of an individual or a group of people for a short period of time.

What is preventive detention?

Detention, on the other hand, is when the police hold a person suspected of a crime in their custody. The person is detained for questioning and the discovery of new evidence during a police investigation or trial.

It is a judicial measure that temporarily and exceptionally restricts the freedom of a person. Its purpose is to guarantee the effectiveness of a criminal process and/or the execution of a sentence.

Misdemeanor defendants in California are generally released on their own recognizance after being presented. Unless they have a criminal record for other crimes or fall under the California 3 strikes law.

What is the preventive detention hearing?

It is the one in which the judge listens to the arguments of the parties to proceed to arrest or not a defendant during a criminal trial. Pretrial detention hearings serve as an alternative to California bond hearings.

The celebration of the pre-trial detention hearing will depend on the situation of the accused:

When can the police arrest a person?

Section 836 of the California Penal Code defines when and how a police officer can make an arrest. Whether you are in compliance with a court order or in any of the following circumstances:

What is the difference between apprehension and arrest?

It differs from retention which means briefly detaining a person while the officer:

How long can a person be detained without charge in California?

Anyone who is arrested and detained must appear in court within 48 hours. Unlike other states in the country that set the time limit for filing charges at 72 hours.

If the prosecution does not file charges during that time, the suspect should be released immediately.

How long does a misdemeanor arrest warrant remain active?

In California, a misdemeanor warrant remains active until it is expunged. In other words, they have no expiration date. Except that the crime has prescribed.

Then the order should be dismissed by the judge. The California statute of limitations for misdemeanors is 1 year from when the offense occurs.

What do I do if I am arrested but I am innocent?

For a person to face an arrest knowing they are innocent is a challenging and stressful situation. However, with the help of an experienced criminal defense attorney, they will be able to fight for their rights.

Remember that in order for the police to arrest you, they need to have a valid reason. That is, a probable cause. Our lawyers recommend in these cases not to resist arrest to avoid possible police outrages.

On the other hand, the police will have to prove the guilt of the arrested person, not the other way around. The burden of proof rests with the arresting officer. During the court appearance, their attorney will be able to prove their innocence.

Note: If the person resists arrest, even though they are innocent, they could face this charge and be convicted.

Can a resisting arrest charge in California be dropped?

Yes. As long as the person proves their innocence or the prosecution does not have probable cause. Otherwise, the accused person must be released.

You may also be interested in reading our article on how to clean a criminal record.

What happens if I lie to the police?

As stated above, providing false information to the police is also punishable as a misdemeanor.

Similarly, a person can be charged with resisting arrest in California, as described in section 148a PC, for:

When the crime is committed against several officials, the person could be convicted of multiple violations of the law.

Do you know what the penalty of perjury in California is? In the link you will find everything on the subject.

Is it also considered illegal to record a police officer during an arrest?

No. Following an amendment to the law in 2015, California allows recording or photography while an arrest is being made. Especially, if during the execution of the arrest there are arguments or altercations between the officer and the suspect.

Only that whoever is recording the event cannot interfere with the police. They must remain where they currently are without obstructing the officer’s work. The other condition is that that person has the right to be in that place at the time.

If you are facing a resisting arrest charge in California, give us a call and we can defend you. Our criminal lawyers have treated this type of case with great success for over 40 years. Contact our office now and we will arrange a professional, no obligation consultation for you.