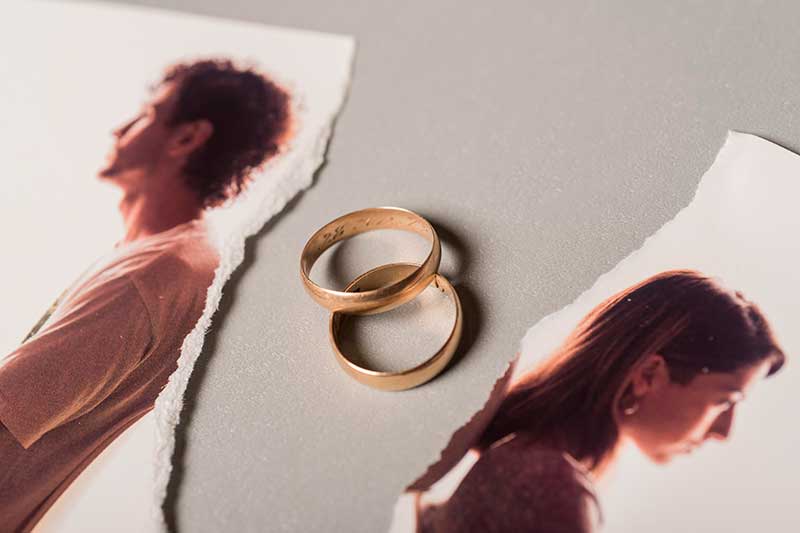 If you are going through a complicated or untenable situation as a couple, you may have asked yourself what happens if you divorce before the Green Card interview. In this article we will explain this topic in detail.

Do you think your permanent residence is at risk? Your relationship is not what you thought and you fear that divorcing your partner will affect you? Contact our Los Angeles immigration lawyers immediately for full legal support.

The impact of a divorce between an alien and an American depends on where the marriage is in the process. This is because divorce can occur:

To better understand these cases, we will take a closer look at each of these aspects where we will answer the most common questions of immigrant spouses:

I Was Fixing My Residence And I Got Divorced, What Will Happen?

Any divorce or separation of an alien spouse from a U.S. citizen before the U.S. government has approved the application for permanent residence will result in the cancellation of that application. In addition, the immigrant:

Even if USCIS has approved the petition for permanent residence, if the alien gets divorced, they lose their eligibility for a Green Card if one has not been issued.

Thinking of marrying an American? Don’t know how to marry a US citizen or resident? We invite you to learn about the K-1 visa, which is better known as the “ fiancé(e) visa”.

If I Get Separated I Lose My Residency, What Can I Do?

Although the separation of a marriage can lead to the cancellation of permanent residence, the immigrant may be able to obtain a Green Card based on other categories, such as:

At this point it is important to have an immigration attorney to examine the case and determine what is the best alternative or possible solution for the alien. In Lluis Law you will some amongst the best.

So what happens if you divorce before the Green Card interview? Read on to expand your knowledge on the subject. This way you will be able to know how to legally enter the United States.

How Does Divorce Affect Conditional Residency?

Aliens who have been married to an American for less than 2 years and still have conditions on their Green Card will be affected by divorce. However, they may be able to take the following steps to remain unaffected:

It can be difficult to prove to USCIS that the marriage was bona fide if you are getting divorced before the US government removes the Green Card conditions.

For these cases, the representation of an immigration attorney who examines the case and subsequently represents the immigrant at this stage is recommended.

Remember that before you get permanent residence, you may be at risk of deportation. The lawyers at Lluis Law are not only immigration lawyers, they are also specialist deportation lawyers. Call us today to take care of your case.

What Happens If I Divorce After Permanent Residence?

In general, after obtaining permanent permanent residence, the alien should not have to worry about being deported if they divorce an American, at least in most cases.

Therefore, a divorce is possible after filing the I-751 jointly, but the permanent Green Card must have been obtained and not the conditional one.

Are you still wondering what happens If you divorce after or before taking the Green Card Interview? As a foreign national, you may be interested in learning about the consequences of applying for food stamps in the United States.

What Happens When You Divorce A US Citizen?

Although getting divorced after becoming a lawful permanent resident does not usually lead to deportation abroad, divorce can affect the immigration status of other family members who relied on the same immigration benefit.

In addition, it may also affect the visa applications of other relatives sponsored by the foreign spouse or fail to meet the child and welfare obligations of the other spouse, which would be considered abandonment of home in the United States.

Continue reading with us, we will cover more information on what happens if you divorce after or before the Green Card interview and residence

Can I Go To The Consular Interview Without My Spouse?

Immigration law does not require the US spouse to be present at the consular interview conducted with the foreign spouse. This is because:

Although you can attend this interview without your US spouse, any child who is at least 14 years old and is listed on the application must attend the consular interview.

We remind you that there are several interviews for this marriage process with an American. For example, there is the interview of marriage-based Green Card interview questions where their goal is to detect a sham marriage.

What Happens If I Get Divorced While The I-485 Petition Is Pending?

If the alien has applied to adjust status by filing Form I-485, but has not yet attended the adjustment of status interview at the time the marriage ended, the I-485 application may be denied and the interview cancelled.

The alien is considered to lose their Green Card eligibility if the divorce is finalized while:

If this entire process has been successfully completed, then a Green Card cannot be revoked in the event of a divorce (as long as the US government has issued the “final and permanent” Green Card and not the conditional Green Card).

You are not yet married and you are still wondering if you can lose permanent resident status if you divorce? Perhaps you should first ask yourself if it is really possible to get married in the United States on a tourist visa.

How Long Do I Have To Be Married To Fix Papers?

The average time to get your papers ready when marrying an American varies, depending on whether you are a US citizen or lawful permanent resident, as well as other circumstances. These times can be:

Arranging the paperwork can be a complex situation in some cases, especially if you enter with a tourist visa for the United States. Visit our blog “Change of status from visitor visa to Green Card” where we cover this topic in depth.

What Happens If My Spouse Does Not Show Up For The Green Card Interview?

Although the US spouse is not required to attend the consular interview conducted abroad, the immigration process is highly dependent on the presence of the US spouse.

The possible consequence that may arise if the US spouse does not attend the interview for the Green Card of the foreign spouse, is that:

Although the aliens can explain the reason why their US spouse did not attend the interview, immigration officials may consider that the American is not cooperating with the process, which would lead to the cancellation of the process.

Note: If the American was unable to attend due to scheduling conflicts, the interview must be rescheduled at least once.

How To Remove Conditional Green Card After Divorce?

If a divorce occurs before the conditional Green Card is removed, it is not possible to lift the conditionality or continue with the process. This is because the national foreigner will become ineligible for residency based on marriage.

Additionally, the conditional residency clause in the Green Card requires the couple to file a joint petition. Therefore, if the couple is facing a separation or annulment of the marriage, they will not be able to continue with this process.

You already know what happens if you get a divorce before and after the Green Card interview, but are you aware of the consequeces of illegal reentry after deportation? In our blog you will find an article with extensive information on this topic.

Can I Get A Divorce After Getting A 10-Year Green Card?

Generally, Green Card holders are not negatively affected after a divorce if they are already permanent residents with a 10-year Green Card.

Green Card holders can change their name on the document at the same time they replace or renew it. To do this, the holders must present legal evidence showing that they need to change their name.

Generally, when a permanent resident already has the requested years in the United States, they may be eligible to become a US citizen.

Do you want to do it but you still don’t know how to speak English? Check our article on “How to become a US citizen without speaking English” where we cover all this topic.

Can You Lose Your Citizenship If You Get Divorced?

Depending on the circumstances, a divorce may affect the alien’s eligibility to become a US citizen, even if they have a Green Card.

When the alien files to become a US citizen, USCIS will look at their immigration files and they may find something suspicious at the time of the divorce. In addition, you can request abroad:

Is the day drawing near to become an American citizen? Then you must know how to dress for the citizenship interview to be presentable for that long-awaited day.

I Think My Husband Married Me For A Green Card, What Can I Do?

If an American suspects or believes that their foreign spouse used them to obtain a Green Card, the American should go to Immigration and Customs Enforcement (ICE) as soon as possible.

Fraudulent marriages to obtain US permanent residence is considered a federal crime. Therefore, the national foreigner can face the following punishments:

If the American was also involved in the sham marriage, they could receive the same punishments, except for deportation and a Green Card denial.

Of course, if the American spouse does not want to make life difficult for their foreign spouse, they can file for divorce on their own.

A topic of interest for those who are wondering about what happens if I divorce before the Green Card interview and do not yet have the papers, is knowing if an illegal immigrant can fly within the USA. In our blog you will find the answer.

Can A Person’s Residency Be Revoked?

An individual cannot take away another individual’s residency. However, getting married for the sole reason of obtaining residency is considered fraud. Thus:

In conclusion, although the residence of a husband or wife cannot be taken away for no reason, if it is a sham marriage, the application for residence abroad would be rejected.

These cases are often complex and difficult for an American, especially if you were in love with your partner. For this reason, it is advisable to consult with our specialist lawyers in these matters.

How Can The Immigration Lawyers At Lluis Law Help You?

The process of obtaining a Green Card for marriage after a divorce can be complex, as USCIS must determine whether the marriage was bona fide or sham. If the latter, it could cost the alien resident status.

The immigration attorneys at Lluis Law have helped hundreds of couples in these situations for more than 40 years. Contact us today so we can begin examining your case and your chances of getting a Green Card.

What is TPS in USA