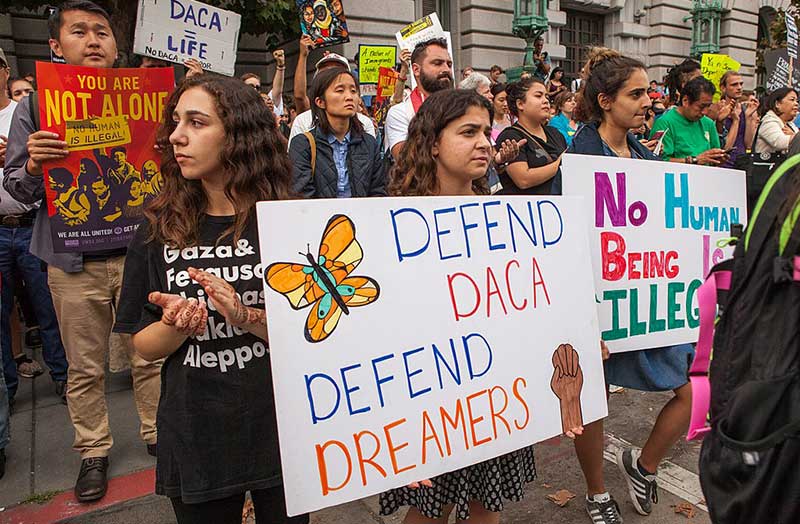 Deferred Action for Childhood Arrivals (DACA) is immigration relief to prevent deportation. It was created with the purpose of protecting young immigrants who arrived to the United States being children.

Despite having broad support in the country, the measure has remained in legal limbo until now. Controversy over its viability continues in the US Congress while its legality is studied in the Supreme Court.

DACA has the particularity that it can be revoked at any time. Hence, it is advisable to get legal help for your renewal or to avoid any deportation procedure. This in the event that the Supreme Court finally considers its removal legal.

Immigration lawyers in Los Angeles at Lluis Law have helped tons of young people to know what DACA is and how to obtain it. Our attorneys have over 40 years of service supporting the Latino community with very successful results.

What is the DACA program for the United States?

The acronym DACA stands for Deferred Action for Childhood Arrivals. The program was created during the Barack Obama administration on June 15, 2012, without Congress approval.

Although it provides temporary protection to young people already living in the country, it is not an immigrant visa. As is the case with the EB-5 visa  or the K-1 fiancé visa. It is just an immigration relief that allows the beneficiary legal status.

Deferred action carries an immigration benefit for young people in the process of deportation or in other circumstances. That is, they have received a final deportation order or they do not have legal status.

This benefit is administered by the United States Department of Homeland Security (DHS). Awarded on a discretionary basis to individuals DHS considers to be eligible.

Through DACA it is not possible to directly reach a way to know how to become a U.S. citizne . Nor does it allow an adjustment of status to know how to obtain a Green Card .

President Donald Trump’s government eliminated the program in September 2017. However, the program is on stand-by for now pending the ruling of the U.S. Supreme Court which must determine whether or not the Trump administration’s decision was in compliance with the law.

DACA dreamers – What is the Dream Act?

The Dream Act (Development, Relief and Education for Alien Minors Act) , is a bipartisan legislative initiative. It was initially presented to Congress in 2006 by Senators Richard Durbin of Illinois and Orrin Hatch of Utah.

This Law for the Promotion of Progress, Relief and Education for Foreign underage, was widely debated along with immigration reform. However, it was not approved and remained that way until it was rescued by the Obama administration.

Their goal was to legalize undocumented students (called dreamers) who came to the U.S. when they were underage. At the same time, it provided an expeditious path to American citizenship.

The Dream Act sought to revoke section 505 of the Illegal Immigration Reform and the Immigration Responsibility Act of 1996. This law sets limits for states to financially assist undocumented immigrants.

The goal was to equalize the university fees charged to citizens with those of undocumented students. Since foreign students sometimes pay up to triple more than their normal cost.

Then students could obtain the temporary Green Card and after graduation, opt for the Permanent Residence.

Benefits of the Dream Act

The DACA Dreamers project offered other benefits to undocumented students. Annually, 65,000 high school graduate students could adjust their status to that of permanent residents, under a 6-year condition.

It further stated that:

Requirements for DACA in 2022

For DACA, there are several requirements where undocumented young people must:

If you qualify but have questions about any of the above mentioned points, you should consult an attorney. Lluis Law attorneys are skilled, capable and efficient professionals.

In any immigration matter, no matter how difficult it may be, we can help you resolve it. Call now and ask for a private and no obligation consultation. If you prefer, you can also visit us at our offices in downtown Los Angeles.

Who qualifies for DACA?

Below is a list of who is eligible for DACA. Whether they request renewal of DACA, because it is about to expire, because it has expired or if it was canceled.

However, if you currently have DACA, it is advised to contact your attorney as soon as possible and request renewal. If you have not been a DACA beneficiary, for now at least, you will not be able to apply for this benefit.

The documents that must be submitted to request DACA renewal include:

Completed forms should be sent and include:

After scheduling the appointment, a receipt is mailed to the applicant and the fingerprint (biometric appointment) notice is provided.

However, the Citizenship and Immigration Service (USCIS) reported that the biometric data presented above will be reused. This is due to the temporary closure of local application assistance centers (ASCs) by Covid-19.

To renew DACA it is not necessary to send again the documents required in the initial application. Only a copy on both sides of the current work permit along with the address.

The exception is when the applicant has had a legal problem or has been detained by immigration. In that case, you should consult an immigration lawyers specialized in DACA to guide you through future steps.

Finally, the decision is communicated by letter or, if necessary, you will be asked for more information.

These are some of the questions our clients ask most frequently about DACA.

Yes, the program is still active only for undocumented foreign young people who have previously benefited.

The DAPA program is a temporary immigration relief that is granted to people without legal status. The acronym DAPA stands for Deferred Action for Parents of Americans.

Recipients are individuals whose children are permanent resident card holders or US citizens. DAPA allows these people to remain in the United States and work legally.

DAPA can be requested by those who have lived in the US since January 1, 2010. This relief allows for a three-year stay and can be renewed. In addition to the work and temporary residence benefits, it protects its holders from deportation.

It also grants the right to request a social security number. A DAPA holder may qualify for a driver’s license or state license plate. Likewise, opt for a travel permit abroad and return legally.

What is a DACA student?

They are those foreign students without papers and children of immigrants who are granted temporary protection. DACA students besides studying can legally work.

Can I still apply for DACA?

Only people who already have immigration relief can apply for DACA, whether it is current or expired. Until the United States Supreme Court decides its legality, no new requests can be made.

The mailing address for submitting DACA renewal requests from those who reside in the state of California is:

What will happen to the DACA immigration law?

The U.S. Supreme Court met in the fall of 2019 to hear arguments about the legality of the DACA program. The latest from DACA is that the court is expected to issue a decision by June 2020 at the latest.

The DACA program in 2019 had quite a stir in the U.S. The pressure exerted by the so-called dreamers and the support organizations generated a great controversy with the government.

Now you know what the DACA program is our Lluis Law immigration attorneys can help you with all the paperwork for your DACA renewal. But we also offer representation in the Los Angeles Immigration Court, if you have a pending case with the court.

If you are a DACA beneficiary and married to a U.S. citizen or resident, we can help you, too. You may be eligible to opt for the Green Card through marriage.

If you have a travel permit or advance parole, we will guide you to obtain your permanent residence card. You can legally leave and return later (with inspection) and apply for the green card.

DACA recipients can improve their immigration status in several ways. Call now for a personalized consultation and we will gladly explain the options that are available to you.

How to become a U.S. citizen