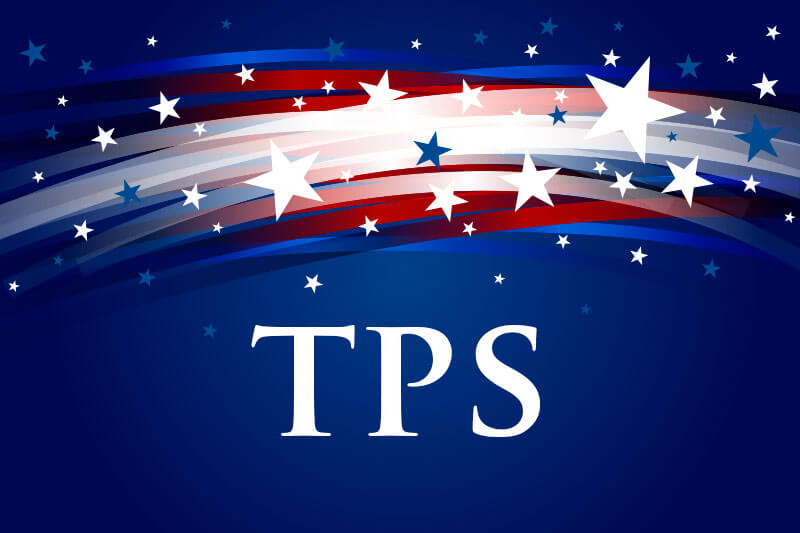 For sure you have heard it before, but do you know what TPS really is in the USA and how it may benefit you?

The immigration benefit known as TPS in the USA means Temporary Protected Status. TPS is granted to citizens of certain countries who meet the eligibility requirements.

After the TPS is approved for a country, its national citizens can make use of it through an express request.

Currently, some countries still enjoy this benefit because it has been extended or due to judicial decisions. Such countries are: El Salvador, Honduras, Haiti, Nicaragua, Nepal, Syria, Sudan, South Sudan, Somalia and Yemen.

Do you want to know what TPS is in the USA and if it helps you in your case? Our Los Angeles immigration lawyers at Lluis Law are specialists in TPS and other immigration reliefs. For more than 40 years we have helped immigrants obtain permanent residence by family based immigration or by employment.

After an intense diplomatic lobby, the Donald Trump government decided to extend the Temporary Protected Status. The extension of this migratory relief protects around 400,000 citizens from Central America, the Caribbean, Sudan and Nepal.

Although also the U.S. Citizenship and Immigration Services , said that the TPS was extended by the Ramos vs Nielsen case. This is a lawsuit filed against the federal government by TPS beneficiaries from Nicaragua, El Salvador, Sudan, and Haiti and El Salvador, along with their American children.

A federal court ruled on October 3, 2018, that this should wait for a final decision. Meanwhile, the federal government’s decision to end TPS was blocked.

The judge who heard the case acknowledged that canceling the program caused harm to TPS beneficiaries and their families. Just like for the communities and states where they live. Since many of the beneficiaries have lived in the United States for more than 20 years.

The court stated that the government’s decision required a full hearing to reach a conclusion. So TPS beneficiaries in these countries maintain their legal immigration status and work permits.

So far the federal government has not appealed this court decision. TPS holders are awaiting the final court ruling that could be issued this summer.

It is a protection resource for foreign citizens with serious problems to survive in their country of origin, if they decide to return, due to situations of war, epidemics or natural disasters. The TPS was created on November 29, 1990 by the United States Congress and is part of the Immigration Law.

DHS is the agency in charge of designating TPS beneficiary countries. The designation is made based on the circumstances of the country affected by economic, natural or political factors. Such circumstances prevent its citizens who are already in the United States from returning.

What are the conditions for a country to qualify for TPS?

The conditions for designating a TPS beneficiary country are as follows:

When does TPS expire?

Foreigners who already benefit from the TPS can continue to process its renewal, at least until 2021. If the appeals court decides to revoke the TPS, its holders would have about 180 days of legal status. However, the court is likely to allow the case to be reopened again in district court.

Instead, if the order is upheld, the case would return to the district court pending a final decision. TPS beneficiaries from Nicaragua, Sudan, Haiti and El Salvador will be able to continue to live their lives normally until the case is concluded.

What benefits does a TPS have?

Some of the most important benefits of a TPS are:

TPS is not a direct way to obtain a Green Card or Lawful Permanent Residence Card. However, nothing prevents the holder from:

Being eligible for a TPS application does not in the least affect asylum applications in the United States. Neither does the Cuban Adjustment Act, NACARA, Special Immigrant Juvenile Status or any other type of immigration benefit.

Even the denial of any immigration benefit does not affect in any way the ability to register for TPS.

What are the requirements to obtain the TPS?

To apply for TPS, a series of requirements must be submitted to USCIS, which we mention below:

Note. If USCIS already made a prior fee exemption, you do not need to resubmit Form I-601. USCIS may grant exemptions in certain cases of inadmissibility for humanitarian reasons. Also to guarantee family unity or for reasons of public interest.

It is necessary to present additional documents that prove the applicant’s identity and nationality, the date of entry to the United States, and evidence of continued residence in the country. All documents must be submitted translated into English by a certified interpreter.

Evidence of identity and nationality

USCIS recommends sending primary evidence whenever possible. For example, copies of the passport, citizenship card and birth certificate. If you don’t have it then send secondary evidence.

This is done by sending an affidavit accompanied by:

a. Necessary evidence of procedures to obtain said documents.

b. Detailed explanation of the problems for the consular processing in the country of origin to obtain the documentation. Along with a signed and written oath that you are a citizen of the respective country.

Subsequently USCIS may require an interview to verify the applicant’s identity and nationality. At that time you can submit the missing documents.

As for the secondary evidence you can present, it includes:

Evidence of date of entry into the United States

How much does it cost to apply for a TPS?

The TPS filing fee for first-time applicants is $ 50. This is the cost of Form I-821. However, TPS re-enrollment or renewal requests do not require payment. Applicants 14 years of age or older must also pay a fee of $ 85 for the right to biometric services.

The associated fees for biometric services may vary depending on the age of the applicant. Also if you require an EAD or if you request an exemption on grounds of inadmissibility. If you don’t have a way to pay, you can request a fee waiver through Form I-912.

What is TPS for Salvadorans?

The TPS program started with El Salvador precisely in 1990, due to the armed conflict that that country experienced. Two years later, when the hostilities ended, that first designation of El Salvador ended.

Then, due to the disaster caused by Hurricane Mitch, again in November 1998 immigration benefits resumed. Attorney General Janet Reno announced the temporary suspension of deportations of migrants from Central America, including El Salvador.

In January 2018, the government canceled the TPS to about 200,000 Salvadorans. The same happened with the benefit to approximately 60,000 Haitians and another 5,000 Nicaraguans.

In 2019, the federal government announced the extension of

“the validity of work permits for Salvadorans with temporary protected status (TPS) until January 4, 2021.”

Clarifying that this did not mean an extension of the program.

“the Trump administration is providing Salvadorans with TPS another 365 days after the completion of the TPS-related demands to repatriate back to their home country.”

Although Salvadoran Foreign Minister Alexandra Hill made it clear that:

“what we know is that, regardless of when (the litigation) ends, we have one more year and the date for us is January 4, 2022 and that is what has been agreed ».

How many Salvadorans have TPS?

Currently, the TPS of El Salvador benefits approximately 195,000 nationals of that country. This benefit was automatically renewed online, but during the current administration that ended. It is now necessary to process your renewal with the USCIS upon presentation of the indicated documents.

What is the TPS for Venezuelans in the USA?

It is an initiative initially presented by 22 Democratic legislators, to which Republican senators later joined. New Jersey Democratic Senator Robert Menendez asked the Department of Homeland Security to grant a TPS to eligible Venezuelans residing in the United States.

Lawmakers addressed a letter to then-Secretary of Homeland Security Elaine Duke, making the request. The signatories argued the need for the TPS “

“as conditions in Venezuela continually deteriorate under the mandate of Nicolás Maduro.”

The motivation of the letter mentions that

“Maduro persists in his deliberate march towards the imposition of a corrupt, one-party dictatorship and the Venezuelan people continue to suffer from extreme shortages of food, medical supplies and other basic products.”

The bill was voted on and passed by the United States House of Representatives. In the Senate, he was presented by Democratic senators Robert Menendez and Dick Durbin, (Illinois). After being discussed, on July 30, 2019 the Senate did not approve it, despite having some Republican votes.

What is the TPS for Hondurans in the USA?

As with Nicaragua, the Honduran TPS was granted on January 5, 1999 by then President Bill Clinton. It was part of the United States’ humanitarian response to the disasters caused by Hurricane Mitch in Central America.

Since its creation it has been renewed on numerous occasions. Currently, the Temporary Protected Status for Honduras benefits some 56,000 Hondurans.

When does TPS expire for Hondurans?

On January 5, 2020, the legal status of the Honduras TPS program expired. However, its beneficiaries will be able to remain in the US until 2021 pending the court’s ruling. USCIS advises Hondurans who have not yet renewed their TPS to consult with an immigration attorney about their status.

Lluis Law attorneys can guide you through the re-registration process and available immigration resources. Call now and tell us about your case, we always have effective answers and solutions for you.

When can TPS be renewed for Salvadorans?

El Salvador TPS beneficiaries can renew their legal status at any time. The extension of the Employment Authorization Document will remain in effect until January 4, 2021.

A TPS for Guatemala

As for a TPS for Guatemala, it is not yet on the horizon. The eruption of the Fuego volcano on June 3, 2018, wreaked havoc in three departments of Guatemala. However, this fact was not enough to consider the designation of the Central American country.

Requests made by the government and humanitarian organizations in that country have had no echo in the federal administration. Despite the fact that the Guatemalan government signed in July 2019, it signed the Asylum Cooperation Agreement (ACA) with the United States.

If you want more information about what TPS is in the USA for your country or require a solution for any other immigration matter, call us. Lluis Law immigration lawyers are specialized in cancellation of deportations . If you prefer, you can also visit us at our offices in downtown Los Angeles.

What is Advance Parole