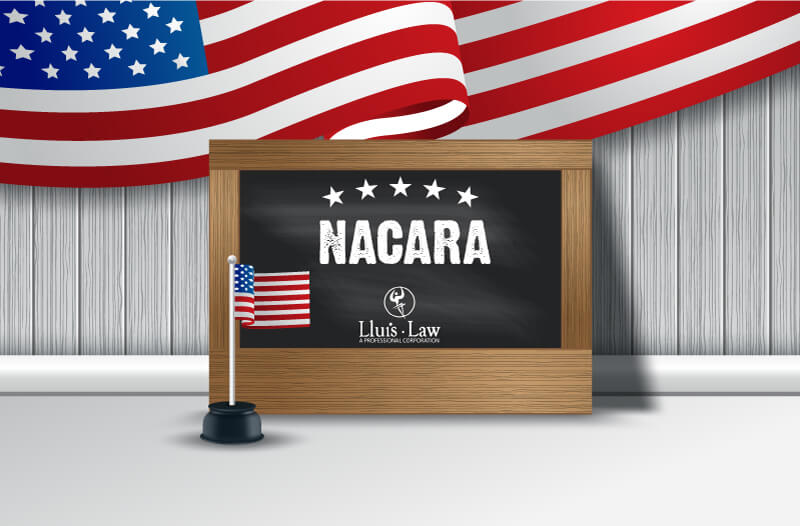 The Nicaraguan Adjustment and Central American Relief Act (NACARA) is a federal law approved by the United States Congress in 1997. Through NACARA, certain immigrants from Nicaragua, Cuba, El Salvador, Guatemala and countries of the former Soviet Union can get immigration benefits and relief from deportation.

The immigration lawyers in Los Angeles of Lluis Law are experts in the NACARA Law. For several decades, we have helped Central American immigrants and other nationalities to become permanent residents and then obtain U.S. citizenship.

What is the NACARA law

The NACARA Law establishes that Nicaraguan, Salvadoran, Guatemalan, Cuban and countries of the former USSR can reach permanent residence, if after applying for asylum in the US they have remained in the country for at least 5 years, from December 1, 1995.

However, the NACARA Law for Nicaraguans and Cubans in accordance with section 202 of NACARA, ended in March 2000. While there is no deadline for citizens of Guatemala and El Salvador, according to section 203 of the law.

Although, American citizens of Cuban or Nicaraguan origin living in the United States, can apply for family based immigration for their close relatives (spouse and children under 21). NACARA provides other nationalities who qualify a way to know how to get a Green Card.

According to USCIS (Citizenship and Immigration Service) statistics between 1999 and 2017, 211,041 NACARA applications were made, of which only 184,169 petitions were approved. This means that there are about 26,000 cases that have not yet been prosecuted for various causes. For example, not sending biometric tests (fingerprints), address changes, etc.

Foreigners who qualify for this benefit and are in deportation proceedings may request cancellation of deportation or removal, through Form I-881 . In accordance with Section 203 of Public Law 105-100 of NACARA.

Who qualifies for NACARA?

2. NACARA Law for Salvadorans. It benefits those who:

First entered the US before September 19, 1990 and applied for the Temporary Protected Status (TPS) or ABC benefits before the former INS, before October 31, 1991.

Likewise, those who were not arrested upon entering the United States after December 19, 1990, and requested affirmative asylum between December 19, 1990 and October 31, 1991; or filed an asylum application after April 1, 1990.

4. NACARA for Spouse or unmarried son / daughter of any person from the aforementioned countries, who meets the requirements and obtained the benefit of NACARA, Section 203. These benefits can also be acquired by children over 21, who have entered to the United States before October 1, 1990.

Requirements for the NACARA law

To apply to NACARA it is always advisable to contact an immigration lawyer in Los Angeles who has experience in processing these cases. So you will know what could be the best way to obtain this benefit, without fear of making mistakes during the process.

There are still cases of Central American immigrants with TPS who could be benefited from NACARA and due to not getting legal help they ignore this fact.

To apply for NACARA benefits, a series of requirements must be met that include:

Documents that must accompany the application

Currently, the waiting time for a response from the United States Citizenship and Immigration Service is approximately 9 months.

What happens after the NACARA application is sent?

After the interested party submits the NACARA application, USCIS sends you a notice of receipt confirming receipt of the request. Like a notification of the date on which an Application Assistance Center (ASC) will take your fingerprints. USCIS subsequently sends them to the Federal Bureau of Investigation (FBI) for record checks.

Once this process is completed, the applicant receives another notification informing him of the date of the interview with an asylum officer. If you want to know more about this process and how to prepare for the NACARA interview, check also the official USCIS website or contact us directly.

We hope this article on the NACARA Law was useful for you. If you need assistance with your specific case, do not hesitate to contact us. We have been helping people in immigration matters for more than 40 years. Lluis Law is one of the most recognized firms in southern California.

Can an illegal immigrant fly within the US

If ICE agents show up at your door