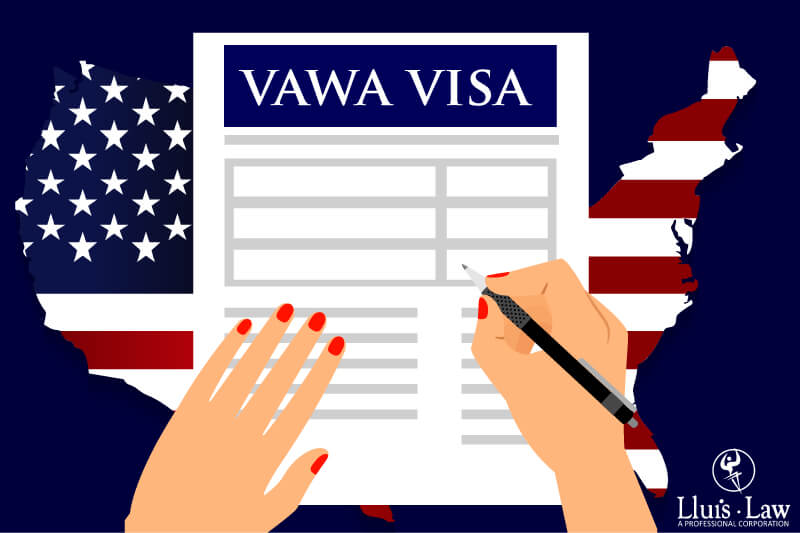 If you or a close relative have been abused you may want to know what the VAWA visa is. Victims of abuse in the United States have the right to file an immigrant visa application under the Immigration and Nationality Act.

The Violence Against Women Act (VAWA) was passed by the US Congress in 1994. As the Immigration Act (INA) was amended, a new appendix was added to protect foreign victims of abuse.

Those people who are abused by their own close relatives can obtain legal status in this way. Thus, the dependency relationship with the aggressor (citizen or permanent resident) that motivates the abuse, can cease.

Immigration lawyers in Los Angeles at Lluis Law have helped abused immigrants for over 40 years. Our family-run law firm with immigrant roots has represented hundreds of victims and helped them protect their rights.

What is the VAWA visa program?

A visa for domestic violence, which protects women, their children and parents. At the same time, this program sanctions abusive couples and seeks a change of attitude at home.

The protection VAWA visa provides to women is expressed as follows:

How does VAWA help victims of domestic violence?

The criminal and civil laws of the United States recognize the rights of people regardless of their immigration status. In this sense, the VAWA visa increases the degree of protection for victims of domestic violence by guaranteeing:

For more information on these points, consult a VAWA visa Los Angeles attorney. At Lluis Law, we have assisted and represented hundreds of victims of abuse by their spouses. We know perfectly the options that you can have at home and how to get a Green Card for domestic violence.

How long does the VAWA visa process take?

Currently, the US Citizenship and Immigration Services (USCIS) are taking longer to process these cases. Processing a VAWA visa application can now take an average of 16 to 21 months. In addition, the application fees were also increased.

Eligibility to apply for a VAWA visa

The Violence Against Women Act (VAWA) allows certain immigration requests to be made in a personal capacity. That is, without the need for notification or approval by the abusive spouse or relative.

Eligibility to apply for VAWA includes both men and women:

Spouse. If you have been personally abused by a citizen or permanent resident or also your child. Includes children and unmarried youth under the age of 21.

Parents. The law also protects parents of US citizens and permanent residents abused by their children.

Child : Unmarried under the age of 21 can file a VAWA petition for themselves in the event of domestic abuse.

The current or former spouses of a US citizen or permanent resident can apply for a VAWA visa. For this they must meet the following conditions:

Even if the abusive husband loses his citizenship or permanent residence because of a domestic violence charge or conviction, the abused wife can file a VAWA petition. You only need to apply within 2 years of the repatriation of the abusive husband.

The USCIS eligibility criteria to qualify a marital relationship are:

While the mother may apply for VAWA on behalf of the child or young person, sometimes this is not possible. For this reason, the law also allows children and young people to make a request for themselves.

To qualify the law establishes some requirements. Let’s see:

For those under the age of 13, the law presumes their good moral character. While for youth ages 14-21, they need to have a clean criminal record.

A child’s requests are on a personal basis, it does not include his / her siblings. However, you can include your descendants but you must not be married.

Eligibility requirements for mothers and fathers

The eligibility requirements are the same as for a child who is the child of an abusive citizen or permanent resident. In both cases, the applicant must demonstrate that he has been subjected to cruel treatment or extreme mistreatment by his son.

Similarly, he must have lived under the same roof as the abuser and be of good moral character. You must also demonstrate that:

The requirements for this type of immigration procedures usually vary according to the circumstances of the case. In addition to protecting parents and children, VAWA can also function as children or spouses of Cuban Adjustment Act, HRIFA and NACARA.

How to file a VAWA petition?

The VAWA application process is actually quite simple:

VAWA applications are generally filed by persons residing in the United States. However, sometimes the applicant may be living abroad. USCIS only accepts these types of requests when the abuser is a US government official. This includes members of the United States Armed Forces.

Sometimes the agency considers requests from foreigners living outside the United States. As long as the crime of domestic violence was committed during a visit to the USA.

Apply for the Green Card by VAWA

The VAWA domestic violence victims program helps certain victims of domestic violence in immigration processes. Through VAWA it is possible to apply for Lawful Permanent Residence (Green Card). After that, you can get US citizenship by naturalization.

Below we explain the application conditions to request this immigration benefit:

What happens to LGBT marriages?

They must be of good moral character and not have entered the United States illegally. However, there may be exceptions in these cases for which it is important to consult your immigration attorney.

If you or a loved one is being a victim of domestic violence and needs to file a VAWA case, call us. If you prefer, you can also visit our office in downtown Los Angeles. With us you will have a quality legal representation, effective and at a very reasonable cost.