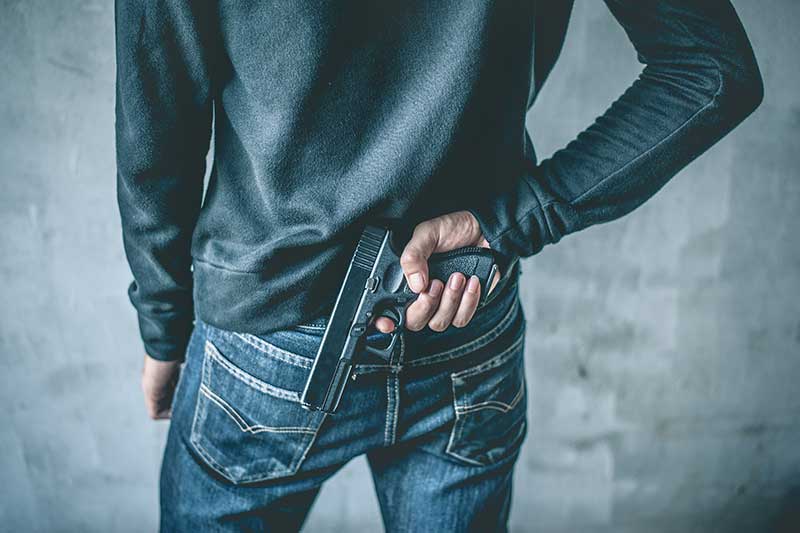 If you are an immigrant, you have surely wondered if you can you carry a concealed weapon in California.

This and many other related questions could come to your mind. If that is the case this article will be of your interest, especially if you are an alien living undocumented in Los Angeles.

Call now and request a private consultation with one of our criminal lawyers in Los Angeles.

Can you carry a concealed weapon in California while being undocumented in 2022?

If you have been charged with illegally carrying a weapon, we can help. Just give us a call and we will be happy to review your case and discuss a defense strategy with you.

Carrying concealed weapons on clothing or in a vehicle is considered a crime in California. This is established by the 25400 PC california concealed carry laws

California concealed carry laws penalizes those who carry a pistol, revolver or any other concealed firearm without a permit. Not only to the owner of the vehicle but also to the occupants.

The charge for carrying a concealed weapon in California (concealed carry), is different from the crimes of:

Although Peruta vs. County of San Diego suggested that the “carrying a concealed weapon” charge might be unconstitutional, it is still imposed in California.

The three elements that constitute the crime to carry a concealed weapon in California are:

Even when the weapon is partially concealed, the person could also be charged with this crime. The mere suspicion that you carry a concealed weapon can result in your arrest.

So can you carry a concealed weapon somehow in California? In short, openly carrying a loaded or unloaded firearm on the street is a crime in California.

How does the law define a firearm?

Any device designed to be used as a weapon, from which is expelled a projectile by the force of any explosion, or other form of combustion

Some of the most common firearms are:

What are the requirements to carry a firearm?

What type of crime is it to carry a firearm?

Carrying an illegally concealed firearm is classified as both a misdemeanor and a felony. That is, a wobbler, also known as a “alternative felony/misdemeanor offense”, ​​which we will explain later.

Whether to judge it as a felony or a misdemeanor is at the judge’s discretion. The person convicted of a serious crime qualified as a wobbler, can request the court to reduce the sentence to a misdemeanor.

Penalties for carrying a concealed weapon in California

The penalties are established according to the classification of the crime.

Depending on the circumstances of the crime, mitigating factors, and the work of the defense, the defendant may receive an alternative sentence of probation. It is then possible that they will spend a short period in prison or even avoid jail.

It will depend on the elements that the judge considers in favor or against to establish only a fine or also imprisonment. Among them:

The existence of aggravating factors makes the crime automatically become a wobbler. That is, the prosecution could establish a charge as a misdemeanor or a felony.

A felony charge under California Penal Code 25.400 is established when the defendant is:

The possible sentence for a person who is found guilty of a crime involving the possession of a concealed firearm is:

What does the wobbler charge represent under Penal Code 25,400 PC?

The rating of a wobbler in California will depend on:

According to Penal Code 25,400 PC, the crime will become a “wobbler” when apart from carrying a concealed firearm in his clothing, bag or vehicle, the defendant:

Note: The arresting officer does not need to prove at the time that the person is not the owner of the weapon. It is enough that they have well-founded suspicions that it does not legally belong to them or is registered in their name.

What is the punishment for a wobbler as a misdemeanor and as a felony?

You could face the following penalties:

If the crime is classified as a felony, the penalties could be:

Additional penalties for carrying a concealed weapon with prior convictions

Any violation of Penal Code 25,400 PC with a prior conviction related to firearm offenses will be punishable by a minimum sentence of 3 months imprisonment in a county jail.

Additionally, if you are convicted of a concealed firearm felony and have previously been convicted of:

You will have to pay 3 to 6 months in prison in a county jail. Unless the judge finds it best to grant probation and suspend the minimum jail time.

Note: The penalty for illegal possession of a firearm may additionally lead to the loss of the weapon.

If you have been charged with this crime, an experienced criminal attorney may suggest the following defenses:

Who can own guns in the US?

Pursuant to the Second Amendment to the United States Constitution, all eligible persons may acquire, possess, and carry a firearm.

However, please note that:

Who is exempt from the crime of carrying concealed weapons?

However, these people are subject to certain conditions of carrying and use. For example, that the weapon must be unloaded or that they can only use them in their own activities.

Who is prohibited from carrying weapons without papers?

In California certain people cannot buy, own and carry firearms, including those who:

What is the minimum age to buy a gun?

Throughout the country the minimum age to buy firearms is 18 years, if it is a shotgun or rifle. For all other permitted firearms, the minimum age is increased to 21, according to the GCA.

With the exception of the states of Alaska, Minnesota, Maine and Vermont where the minimum age to purchase a shotgun or rifle is 16 years.

What if I have an unregistered gun?

Individuals who have a permit to carry a concealed weapon are not guilty of the crime contemplated in Penal Code 26,150 PC. But, if the gun is not registered, then you could be arrested by the police.

As part of its gun control policy, California requires guns owned by individuals to be registered. Other states that require a registration, apart from the license or permit to carry weapons are:

Can legal aliens buy firearms in the US?

According to the Bureau of Alcohol, Tobacco, Firearms and Explosives (ATF), all aliens who have been legally admitted to the country can purchase a firearm.

The only exception is for aliens who:

What happens if an undocumented immigrant carries concealed firearms?

He could receive a punishment of up to 10 years in prison, if they are caught with a weapon in their possession. Undocumented immigrants are generally prohibited from acquiring, possessing, transporting, and carrying firearms.

Regardless of whether or not they have been convicted of a crime. Some criminologists and immigrant advocates consider this discrimination against other people.

Neither can lawfully admitted aliens on non-immigrant visas. Unless they request a special permit endorsed by the governments of their countries and do not fall into the prohibited categories.

How does carrying a concealed weapon affect an immigrant?

If you are an immigrant with legal status or permanent residence, being convicted of this crime can result in:

Other crimes that lead to deportation in California are:

In addition to knowing if you can carry a concealed weapon in California, you may be interested to know that at the Los Angeles law firm of Lluis Law we are specialists in immigration matters. Even in those that involve crimes and possible deportations. Do not hesitate to contact us if you need professional assistance.

After a conviction for illegal possession of firearms, is it possible to restore the right to own them?

Not generally. Unless the person convicted of a misdemeanor has been a ward of a juvenile court.

The right to buy, own or carry a firearm could be restored after turning 30 years old.

To recover the right to carry firearms, you must first eliminate the conviction, the restraining order that weighs on the person or the retention for mental health reasons.

In cases of serious crime, the suspension or prohibition to carry weapons will be for life. Both for adults and convicted minors.

How is the process to restore the right to bear arms?

If it is a felony but qualified as a wobbler, the process is as follows:

The other way to restore the right to bear arms is through a pardon signed by the Governor of California. The two legal procedures for doing so depend on where the applicant resides.

However, if the person was convicted of a felony involving the use of a firearm, the Governor’s pardon will not serve to restore the right to bear arms.

Is it possible to clear the criminal record for the crime of illegal possession of a firearm?

Yes. As long as the convicted person is granted parole. Upon successful completion of probation or early termination of parole.

However, they will not be able to keep or carry a firearm again or avoid being convicted of this crime.

Any parole violation or breach of terms will be sufficient reason for the judge to deny expungement.

If you want to deepen your knowledge on this topic, we invite you to read our special article on how to clear criminal records.

Now that you know if you can carry a concealed weapon in California while being undocumented, you can contact us to review your case. We offer a professional consultation where we will explain in detail your best options. We are experienced criminal attorneys with over 50 years of combined experience.